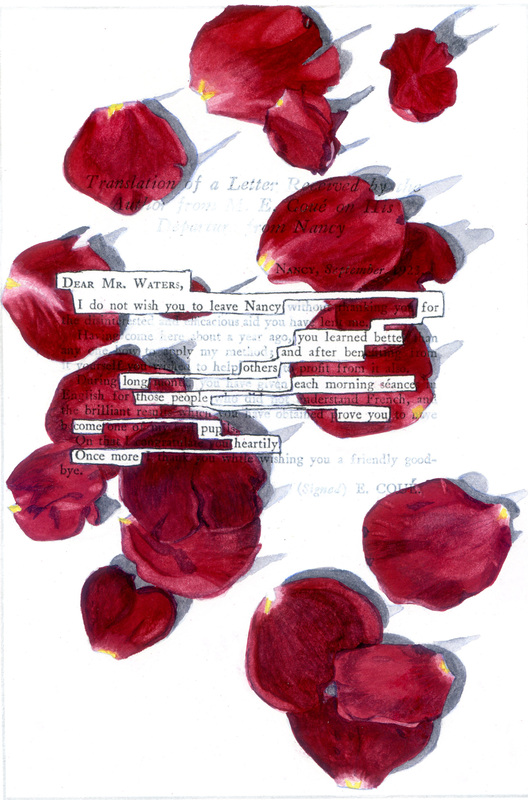 My project, called Auto-Suggestion for Mothers, is an erasure of a 1924 book by the same name, a domestic psychology manual which stipulates that the mother, in her power to mold the child’s every habit, use subliminal suggestion during the child’s half-conscious states at bedtime and mornings. Relying on chance and also my own suggestibility, I eliminate most of the rational, persuasive text in order to challenge, play with, undermine, and explore its arguments; sentences, phrases, words carved out of larger words, and phonemes are left standing for a covert or unconscious voice in the text, a new, sometimes almost in articulable, set of perceptions and thoughts. Using water-color guache, I’m painting scans of the book pages (frankly imitating Phillips), leaving the selected text unpainted; the results often don’t fully obscure the underlying prose, allowing the reader to engage each page on multiple levels. Though the 1924 book is virtually unknown, its concerns and methods represent an American strain as current as advertising and affirmations, and as deep as the West’s privileging of power, rationality, and mind over vulnerability, unconscious processes, and the body.

Melanie Hubbard lives in a small town on the west coast of Florida with her family. Her publications include We Have With Us Your Sky (Subito, 2012) and Gilbi Wincowags (Cannibal, 2008). She has written on Emily Dickinson’s linguistic-philosophical education and has most recently taught at New College of Florida. These illuminated pages are from her current work-in-progress, a treatment of the 1924 book Auto-Suggestion for Mothers. More can be found in the online portion of The Best American Experimental Writing 2014 (Omnidawn).